I recently upgraded my notebook to a 2017 Macbook Pro.
Before that, I used a Hackintosh’ed Acer Aspire V5-573G, which served me very well.

My Experience with the MB Pro

I’ve been using the Macbook Pro for about a month now. Before, I was already using macOS, and it really was a Gateway drug. I originally hated Apple and didn’t like a single one of their products. Eventually, I had some free time in the summer break and decided to build a hackintosh - and the macOS experience surprised me so much that I now own a MacBook.
Good Job, Apple!

I wasn’t sure which MacBook to buy - while they’re not very similar, they all are great Notebooks. The first device I could cross off the list was the Macbook Air - there was no way I’d pay over €1000 to get a 1440p screen. The decision was between the Macbook 12” and the Macbook Pro 13” - I finally decided to get the Macbook Pro because of the “better” (haha) port selection, the more brilliant & bigger screen, and the bigger Trackpad.

To get the elefant out of the room: No, I don’t need this notebook. Everything I can do on it was possible before, and (by raw CPU speeds) it is only marginally faster than my old Hackintosh. What really maskes the MB shine is the experience: Working on it is awesome, no matter what you do. I like the keyboard very well, the Trackpad is awesome (!!!) and the screen is a bare pleasure. To be fair, I don’t need that long of battery time, but 10hrs is very decent as well.

What I don’t like is the port selection. While Thunderbolt is the best choice Apple could make for the lone ports that were left over, 2 just aren’t enough. I’d go as far as to trade off the headphone jack on the right for another two ports, but that may be just me.

In a nutshell, I really like the device. With macOS being a Unix, I can use all the great Dev tools, while still having access to proprietary Software that just doesn’t get released for Linux.

For my next device, there’s one wish I have:
Please, Please, make Type C the standard by then! It is a great port, and I hope that both manufacturers will adapt quickly and facilities will update their devices. 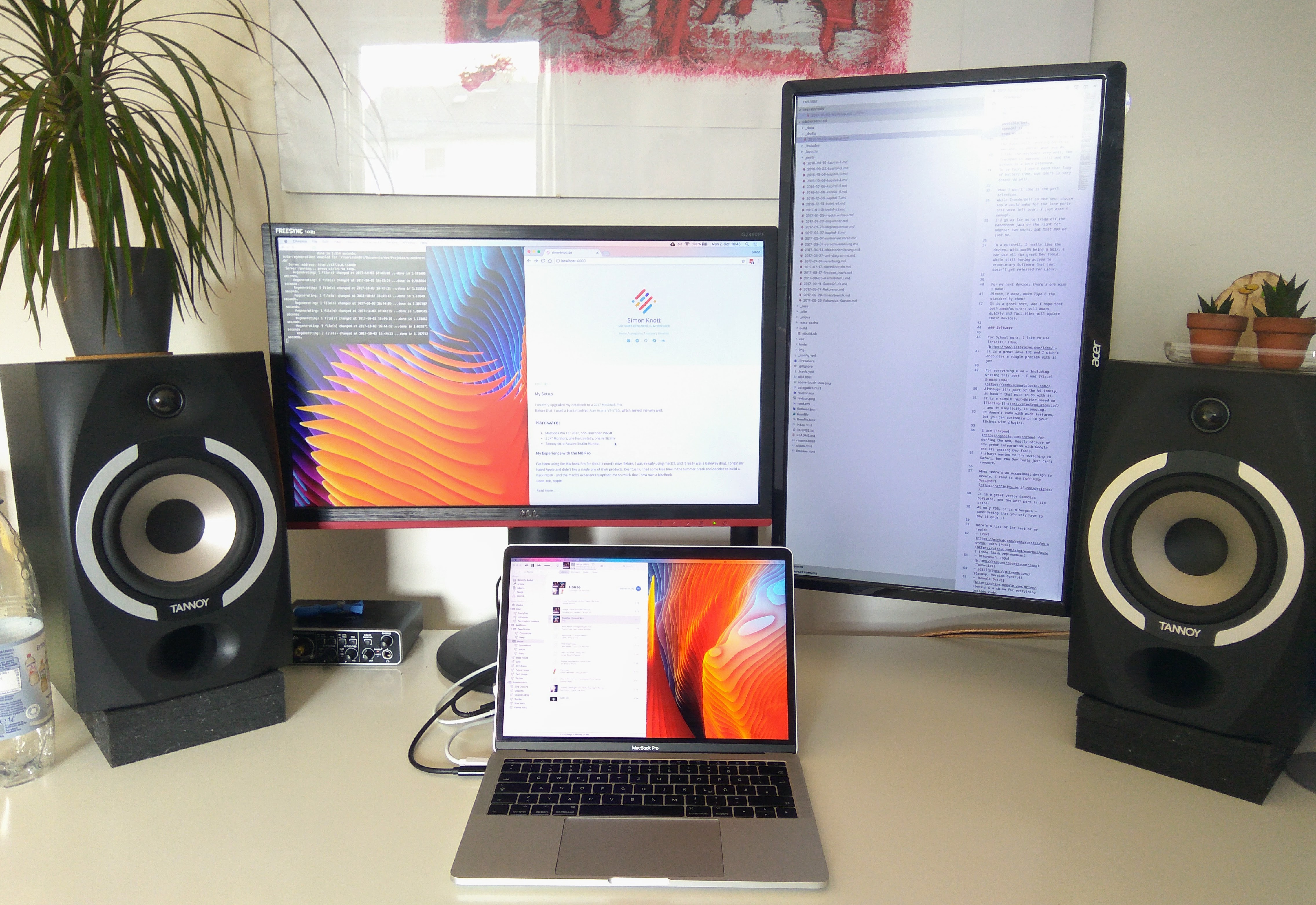 For School work, I like to use IntelliJ Idea. It is a great Java IDE and I didn’t encounter a single problem with it yet.

For everything else - Including writing this post - I use Visual Studio Code. Although it’s part of the VS family, it hasn’t that much to do with it. It is a simple Text-Editor based on Electron, and it simplicity is amazing. It doesn’t come with much features, but you can customize it to your likings with plugins.

I use Chrome for surfing the web, mostly because of its great integration with Google and its amazing Dev Tools. I always wanted to try switching to Safari, but the Dev Tools just can’t compare.

When there’s an occasional design to create, I tend to use Affinity Designer. It is a great Vector Graphics Software, and the best part is its price: At only €55, it is a bargain - considering that you only have to pay it once ;)

Here’s a list of the rest of my tools: